Father’s Day is just around the corner and whether you’re celebrating your dad or being a dad, there’s a lot to be thankful for. We interviewed restaurateurs and creatives around the country to find out what advice or values they or their dads have passed down. 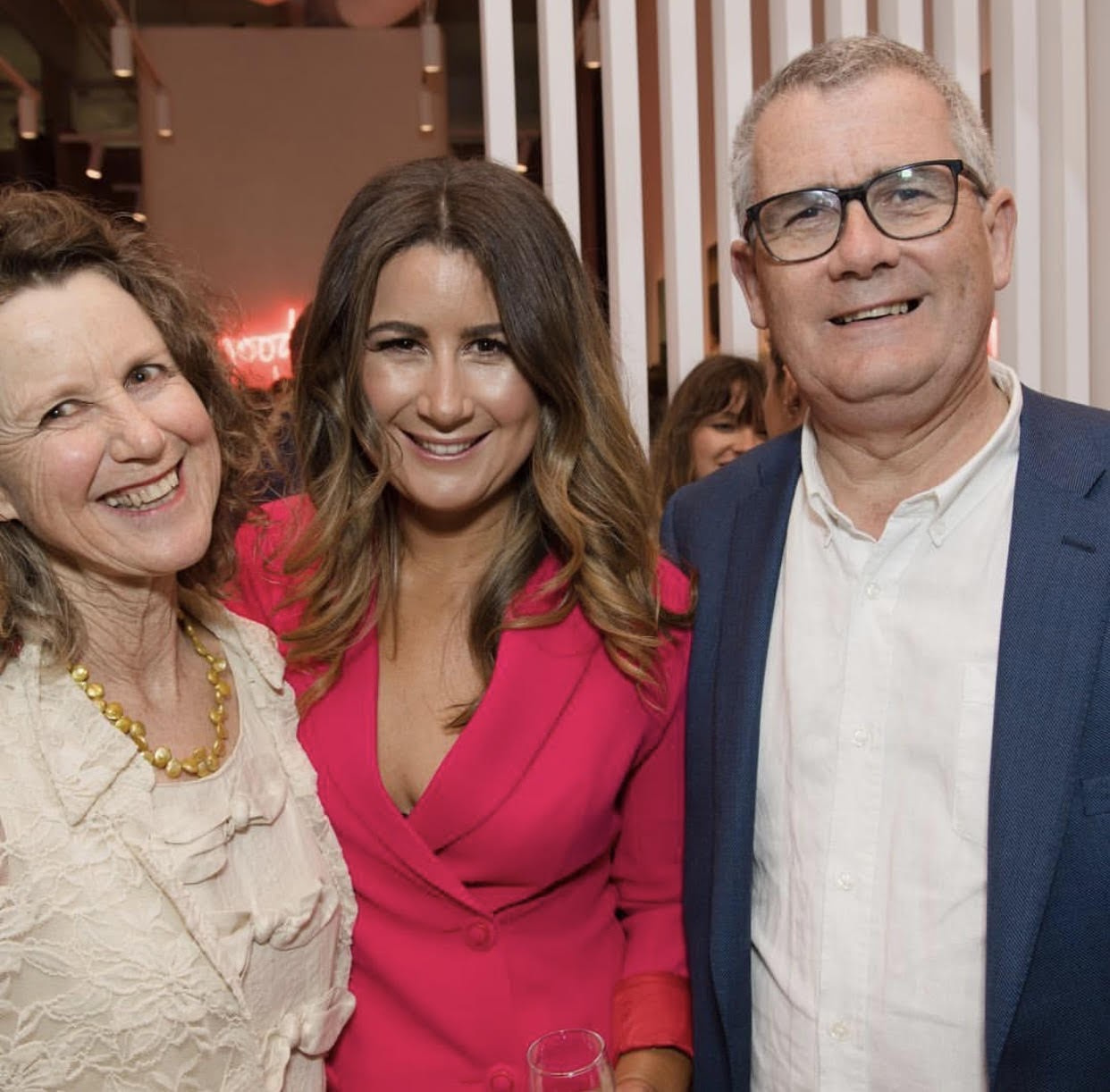 Phoebe, owner of The Blow (the amazing blow dry bar in Melbourne’s CBD) celebrates her dad’s hard-working nature and the gift of being able to spend time together.

“As a businessman and lawyer, my dad put a big emphasis on having a strong and positive work ethic and commitment to community. Values and behaving with integrity and professionalism were everything, and he continues to be an important sounding board for me as I navigate the business world. He’s also my favourite feminist. As one of three girls, we were always told that we had limitless potential and could do whatever we wanted, personally and professionally. Knowing that I was always supported and trusted gave me deep confidence in my ability to pursue and achieve my dreams.”

Phoebe’s favourite memories are also of the two playing sport on the weekend and spending the afternoon watching it on TV.

“Three generations of my family are from Geelong, and I have so many great memories watching the Cats together, which continues to this day! Despite being busy, he (dad) was always there for us as a family, which is something that I treasure.” 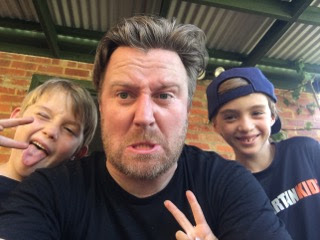 when it comes to life lessons, being kind and true to yourself is what he hopes to pass on to his kids.

“For me, the number one thing is having good manners. My grandfather always used to say manners, especially table manners, can take you anywhere in the world – the old bugger was right (laughs). I would hope they take on having a strong work ethic, being adaptable to situations and most importantly having fun while doing whatever they wish. Being able to think big, take care of others and nature and laugh loudly are all important to me when raising them and this is what I want them to take into their adulthood.” 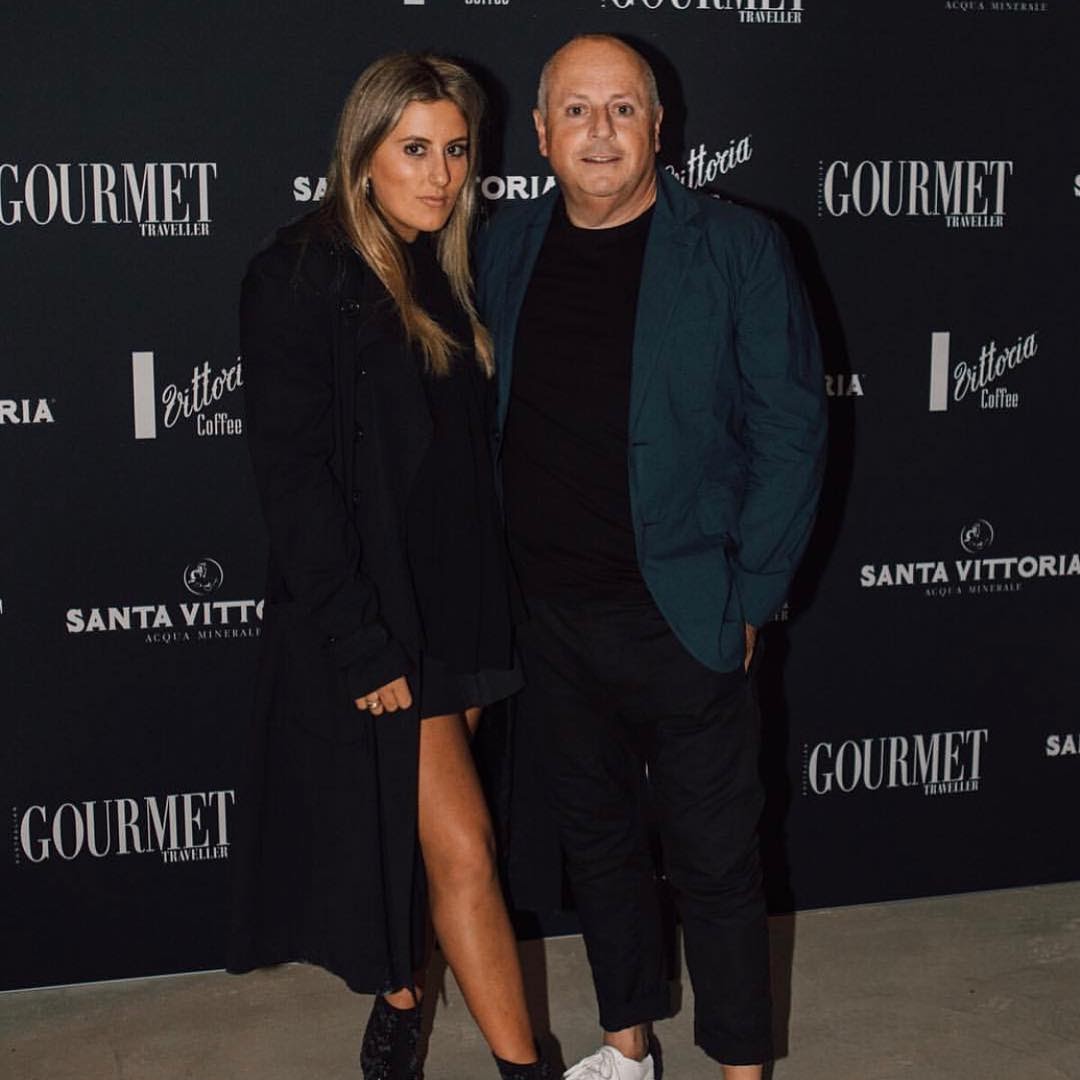 Chris and his daughter, Holly

Chris from the famed Lucas Group has three “grown up” kids who share his love of food and business, with his daughter Holly the Creative Director of his business. He also learnt many tricks of the trade from his own dad who was a big inspiration to him growing up.

“I was born in Geelong and grew up learning about restaurants from my father who was a chef. Food has always been my passion. My kids, Holly (30), Conrad (28) and Ryley (25) all share my passion for food and wine, he says.

“I’ve always tried to inspire my kids to follow their dreams. Life is way too short and we should always focus on what can be achieved rather than what cannot – a positive outlook in life will overcome most issues or problems that we will all ultimately face as we progress through life.” 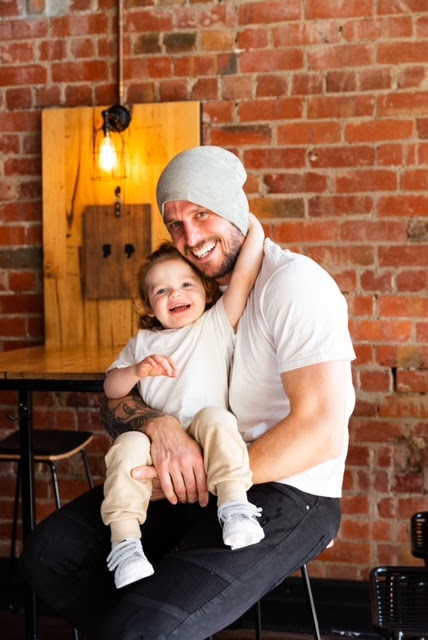 Greg is new to being a dad. His son Zayn just turned two, but they already have a tradition of making pancakes together on Father’s Day.

Zayn’s first two years of his life have been mostly spent in lockdown, but Greg says it been a blessing to be able to be there for all of his firsts and to appreciate watching him grow and learn.

“I want to be able to pass on the advice to him about work ethic but making sure that you love what you do. Following your passion and finding what makes your soul feel alive is just as important as your work ethic. If lockdown has taught us anything, it is to make the most of the time we have and do what makes you smile.”

Dani Valent, Restaurant Critic for publications including Good Food, The Age, and more.

Dani Valent’s father, Dr Paul Valent, is a Holocaust survivor who lived in open hiding in Budapest as a small boy during the Second World War. He is inspiration to her in many ways, encouraging her to embark on a career in writing, despite the challenges she may face.

“While living in peril, he decided he wanted to be a writer, to solve the problem of people wanting to hurt each other. He moved to Australia as a child, and despite English not being his first language he became a doctor, and then a psychiatrist.

Later in life, he took up his lifelong dream of writing, and he is still writing today, solving problems, helping people. His story, and his perseverance really inspired me to become a writer – Dad always encouraged me to do it.

Even today, he and my Mum are the first to read my stories, send them to their friends and congratulate me. There are scrapbooks! Dad hasn't only been a cheerleader, he's been a life-shaping example of integrity, kindness and perspective. I'm so lucky.”

Get Staff Going with the Corporate Gift Card

Hit that quarterly target early? Corporate e Gift Cards are the best way to say thanks and ensure you’re buying...

Find all the details on purchasing, using, and maintaining your EFTPOS Gift Card from TCN.

Shopping for your Dad can sometimes be a tricky endeavour. How many times can you buy him a slab of...

Sometimes dads are a little ‘hard to read’. They may act as if a cup of coffee, and an undisrupted...

Get Staff Going with the Corporate Gift Card

Find all the details on purchasing, using, and...

Find all the details on purchasing, using, and maintaining your EFTPOS Gift Card from TCN.

Father’s Day is just around the corner and...

Father’s Day is just around the corner and whether you’re celebrating your dad or being...

Shopping for your Dad can sometimes be a...

Shopping for your Dad can sometimes be a tricky endeavour. How many times can you...

Sometimes dads are a little ‘hard to read’....

Sometimes dads are a little ‘hard to read’. They may act as if a cup...

Thanks, Dad! The Best Father’s Day Gifts for Every Type of Dad

Dads come in all shapes, sizes, and... varieties. Father's Day gifts should reflect something personal...

Skincare to Splurge On Around Australia

Something for those that love Mojitos and fruity,...

Something for those that love Mojitos and fruity, light cocktails – the Mint Julep is...

Check out the dessert menu before the mains?...

Check out the dessert menu before the mains? If you consider yourself a sweet tooth,...

With consumer shopping habits shifting to online shopping during the pandemic, it also brings about...

6 of the most interesting art house cinemas in Australia!

Catch your favourite flick in style at some...

Catch your favourite flick in style at some of the best art house cinemas around...

Best winery restaurants to check out for a delicious winter lunch!

Dust off your winter boots and take a...

Dust off your winter boots and take a trip to the regions of your capital...

Be Generous - We chat with award winning chef - Sarah Todd.

Sarah Todd rose to stardom in her debut...

Sarah Todd rose to stardom in her debut on MasterChef in 2014, where she went...

The Most High-End Day Spas You'll Find In Australia

From luxe facials right through to hot springs,...

From luxe facials right through to hot springs, Australia is home to some of the...

Best Of The Cocktail Bars - Here's What Opened In 2021

Get your drink on at some of Australia’s...

Get your drink on at some of Australia’s best new bars - we’ve rounded up...

Be Generous – We chat with Jock Zonfrillo

We’ve interviewed some of our favourites in the hospitality world to find out how they’re...

Be Generous - We Chat with Alice Zaslavsky - Author and Culinary Correspondent for the ABC.

When it comes to cooking, many learn and...

When it comes to cooking, many learn and treasure their earliest memories with their mums....

Be Generous - We Chat with Vince Estacio - the Head Chef and the Co-Owner of Naïm Restaurant in Brisbane.

We’ve interviewed some of our favourites in the hospitality world to find out what the...

10 Of The Most Interesting Dishes In Australia Right Now

Dining out has never tasted better. We’re sharing some of our favourite dishes that you...

Be Generous - We Chat with Brendan Pratt from Vasse Felix

Be Generous - We Chat with Alice Bennett from Miss Trixie Drinks Tea!

Be Generous - We Chat with the wonderful founder of the Savour Chocolate and Patisserie School Kirsten Tibballs!

We’ve interviewed some of our favourites in the hospitality world to find out what the...

Round Up Of The Best Looking Pubs In Your City

Nothing says a wintery Saturday evening like pub grub. From a hearty parma to a...

Be Generous - We Chat with Diana Chan.

We’ve interviewed some of our favourites in the hospitality world to find out what gift-giving...

Be Generous - We Chat with Hakim Halim, Founder and Cheesemonger of Ripe Cheese.

Be Generous – An interview with Andreas Papadakis

Be Generous - We Chat with Fleur Studd - Founder of Market Lane Coffee and Melbourne Coffee Merchants.

Be Generous – An interview with Khanh Nguyen

If you haven’t heard of Sunda in Punch...

If you haven’t heard of Sunda in Punch Lane, you’re missing out on one of...

Giving back to the community has been at...

Giving back to the community has been at an all-time high this year. Whether it’s...

At TCN we believe it's good to be generous

Wanting to reward and recognise staff or clients?...

Wanting to reward and recognise staff or clients? Wanting to incentivise and acquire new customers?...

The best gifts to buy for foodies

Stuck for a gift idea for the foodie...

Stuck for a gift idea for the foodie in your life? Here are our 9...

Be Generous - We chat with Julien Moussi from Only Hospitality Group

Julien Moussi - the founder and owner of...

Julien Moussi - the founder and owner of the Only Hospitality Group - is the...